A Poetics of Courtly Male Friendship in Heian Japan 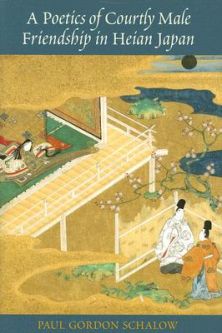 Western scholars have tended to read Heian literature through the prism of female experience, stressing the imbalance of power in courtship and looking for evidence that women hoped to move beyond the constraints of marriage politics. Paul Schalow’s original and challenging work inherits these concerns about the transcendence of love and carries them into a new realm of inquiry—the suffering of noblemen and the literary record of their hopes for transcendence through friendship. He traces this recurring theme, which he labels "courtly male friendship," in five important literary works ranging from the tenth-century Tale of Ise to the early eleventh-century Tale of Genji.

Whether authored by men or women, the depictions of male friendship addressed in this work convey the differing perspectives of male and female authors profoundly shaped by their gender roles in the court aristocracy. Schalow’s approach to the poetic element in the texts focuses on identifying motifs and rhetorical structures that recur in poems about male friendship. In addressing the prose narratives, he concentrates on describing pairs of male characters created by the authors. The nobleman’s desires for erotic adventure with women and for friendship with men are not contradictory or mutually exclusive in these texts, but are integrated and play off each other in interesting ways. In fact, to be both a lover of women and a friend of men comes to define the very notion of what constitutes a hero in the Heian period. Such a hero embodied the courtiers' hopes of overcoming the numerous obstacles to intimacy that existed in their admittedly privileged lives. Schalow’s analysis clarifies in particular how Heian literature articulates the nobleman’s wish to be known and appreciated fully by another man.

The historical contexts that produced the desire for male friendship in the Heian court and the specific manifestations of that desire in Heian literature are radically different from those in our own time, a thousand years removed. Nevertheless, the poems and narratives addressed here manage to speak to us movingly about the Heian nobleman’s very human desire for the intimacy of a friend.