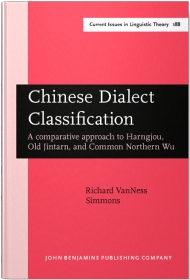 This volume is an investigation and classification of dialects along the Wu and Jiang-Hwai Mandarin border in China's eastern Yangtze Valley. It is the first monograph-length study to critically question the traditional single criterion of initial voicing for the classification of Wu dialects and propose a comprehensive comparative framework as a more successful alternative. Arguing that dialect affiliation is best determined through analysis of dialect correspondence to common phonological systems, the author develops a taxonomic analysis that definitively distinguishes Common Northern Wu and Mandarin dialects. By clarifying dialect affiliation in the Wu and Mandarin border region, this volume makes significant contributions to our understanding of the true nature of the region's dialects and their history. Using primarily data drawn from the author's own fieldwork, the volume contains copious comparative examples and an extensive lexicon of the Old Jintarn dialect.